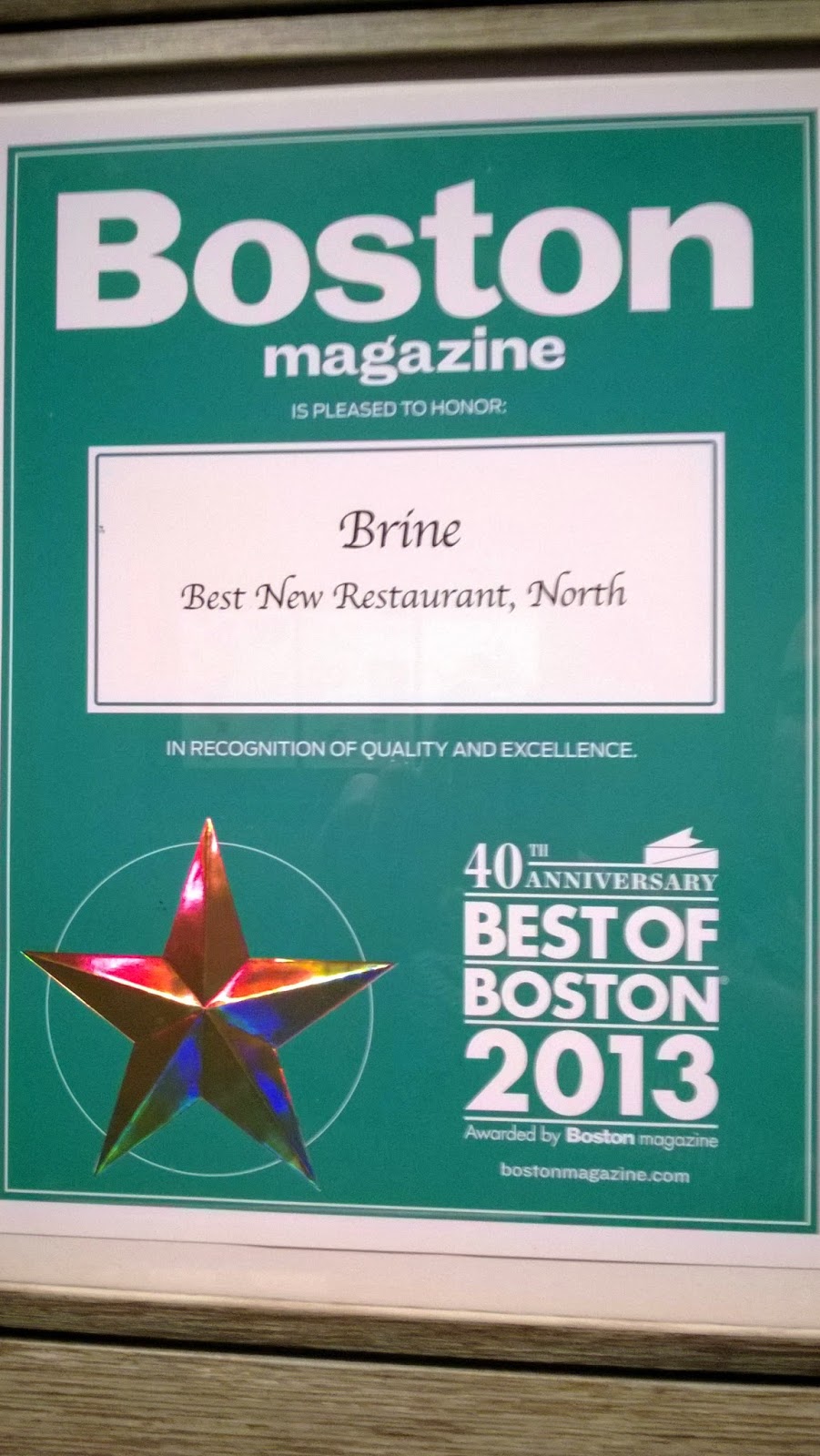 What makes a great restaurant? It's a debate that didn't so much rage as bubble along amiably on Twitter recently, in response to Chris Pople's fine "restaurant of the year" post and a general conclusion - well, at least by him, me and Kavey - that, while dining fireworks are marvellous, sometimes it's more about having a reliably good time. As it happens, my favourite meal of 2013 was a rather lovely combination of culinary fireworks, simple pleasures and feeling completely looked after. The location? A restaurant called Brine, in the charming Massachusetts town of Newburyport.


Located a 50 minute (very pretty, "leaf-peeping" New England-in-the-fall) train ride from Boston, Newburyport is the sort of small town that Bill Bryson was once looking for but one that seems to be holding onto its values while also marching happily into the 21st Century. This is no doubt a tad simplified and a bit pink-spectacled - clearly many in the region are feeling the pinch of the global economic climate - but for the most part Newburyport, as demonstrated by an excellent food walking tour the following morning, seems to be ticking along very nicely, with lots of great and interesting businesses providing great and interesting products.
The nature of Newburyport and the pleasures of living there first came up early that evening over a couple of beers with a complete stranger while sitting at the bar at Ceia. I'd slightly misjudged the length of time it was going to take me to walk from my lovely room at The Garrison Inn to Brine, so my "find somewhere nice for a quick pre-dinner drink" turned into "find somewhere nice and nestle in for a while." Ceia a) looked inviting and b) is pretty much opposite Brine so looked like a good bet. It was. Funnily enough, it turns out it's owned by the same people as Brine but, as it happens, the interior also brought to mind the classic American model borrowed so beautifully by Chris's 2013 pick, Burger & Lobster. However the citizens of Newburyport are considerably friendlier than your average Londoner and hence I soon found myself discussing local beers, the region's fish and assorted other topics with the chap to my right.


Earlier that day I'd been to Finz in Salem (see last post) and had ploughed through a huge amount of oysters and clams and other local delights. It had left me very happy indeed but really craving meat so when my chatty co-drinker's burger arrived - "the best burger in the area" he declared between mouthfuls and it looked it too - I was making vague plans to cut my evening at Brine short and sneak back over the road for a sandwich... plans that drifted happily away within about 10 minutes of sitting down at Brine.
As I may have mentioned here in the past (and as friends to whom I've sent copies of Malcolm Gladwell's Blink will confirm) I'm a great believer in gut instinct. And, a couple of sips in and four great oysters down, Brine felt a lot like home, which possibly explains why, instead of sneaking across to Ceia for a burger, some four hours later, I was still sipping red, grinning like an idiot and starting to work out how I could throw my 50th birthday party at Brine in 2018.
The chef is Corey Marcoux and, towards the end of the evening, he joined me for a chat, talking me through some of the dishes, his ideas and other Boston recommendations, a conversation that: a) continued via Twitter during the rest of my visit; and b) prompted my wife to describe it as a "bromance" and ask "oh, is it another message from your boyfriend?". She may just have been taking the mickey but, actually, Corey is one of those people you just click with and the front of house staff - under the guidance of the Bryanna Tebbetts - are similarly lovely.
Am I gushing? Probably. But, in basic terms, Brine (which, as  you may have spotted from their website, is subtitled "Oysters Crudo Chops") just ticked all my boxes. A glance at the pictures shows off Corey's smart presentation, while a read of the captions gives a hint at the craft of the menu. This is a restaurant that can serve you something gloriously sophisticated and involved such as poached lobster, with gnocchi, sweetbreads, cauliflower, seabeans and currants, but also offers a daily "Sausage de la Casa" sandwich. If that wasn't reason enough to visit, they also serve the best damn Clam Chowder I've ever had (pork stock, crisp discs of potato and lumps of pork belly perfection) AND the best single, simple dish I had all year (and, probably, longer). Its name? Bacon and Egg. No. Really. We are, however, talking their own house-made bacon, spiced, thickly sliced and served with fried oysters, a soft poached egg and brined green tomato. "People sometimes order it for dessert," explained my waitress. I wanted to reply "I'm not surprised" but by that point my eyes were rolling backwards in my head and I was probably making noises only species of small terriers can hear. Photos - particularly mine - don't do it justice. Words don't do it justice. You could argue that this dish - simple but creative, familiar but unusual, comforting but with a twist - encapsulates the whole Brine experience and ethos but that's obvious even by my standards.

While eating, I Tweeted several photos of Brine, prompting one friend to Google the menu. She then sent me a message as I was laying down my fork, asking what the hell is going on with the Chocolate dessert. She had a point: the menu describes it as "Chocolate, Brioche, Shiitake, Brown Butter, Hops, Smoke." Her curiosity, Corey's explanation and my, er, thoroughness when it comes to culinary research* meant there was only one possible outcome. The fork needed to come out one more time and dear God am I grateful it did. If I remember correctly - and there had been a few West Coast reds and East Coast beers consumed by that point so I probably don't - the brown butter came in the form of the ice cream, and those little blobs of jelly were where the hops and smoke were lurking. But I could be wrong. Whatever, individually, the elements on the plate were curious, together they were dazzling, and this dish was an interesting counterpoint to the simplicity of what had gone before. This is a chef that knows how to be clever but, better, when to leave things alone. If Corey's presence was the only good thing about Brine, then it would still be a place worth visiting. With this room, this menu, this front of house team and Corey and his entire brigade? Brine may be as close to my idea of a "perfect" restaurant as I've ever visited. People of Newburyport, I hope you know how lucky you are. And if you could just keep it all ticking along until February 2018, until I win the lottery or until I get another commission to visit the East Coast, that would be grand. Cheers.