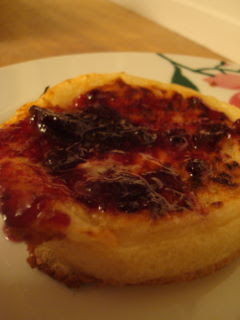 What is about the crumpet that's so blooming appealing? Aside from the comedy name, there's just something about those squidgy little carby things that screams "winter Sunday". Seriously, is there a more appealing foodie mental image than butter melting over a freshly toasted crumpet? Go on. Think about that for a second. You know you want to...
Nice huh? It might be the nostalgia thing but I think the appeal goes deeper than that. The crunchy outside, the spongy inner mass, the way the butter (and cheese / syrup / honey / marmalade / peanut butter etc.,) oozes through its porous flesh... Christ, I'd better stop this before I find myself attracting traffic from some rather more, ahem, adult sites. 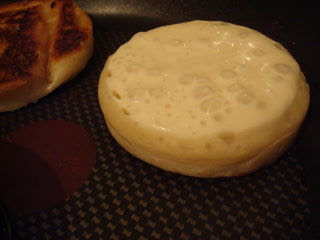 One question that had never crossed my mind though was: what the hell IS a crumpet anyway? I'd eat them 'til the cows come home (ooh, crumpet eating competition, who's in?) but had never once stopped to think how you made them. That was until a recent Guardian Weekend supplement when Hugh Fearnley-Whittingstall got all teatimey on our collective arses. 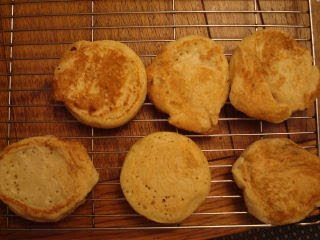 And so, armed with whisk and pan, and with the absolute encouragement of yours truly, resident baker Mrs L whisked up a batch of the batter. The answer to the "what the hell IS a crumpet anyway?" question, incidentally, is basically sort of a pancake, only with a water and milk mix, a complete lack of eggs and the addition of yeast and bicarbonate of soda which, presumably, is what causes the necessary bubbling to give the crumpet its lovely texture and butter-absorbing holes. 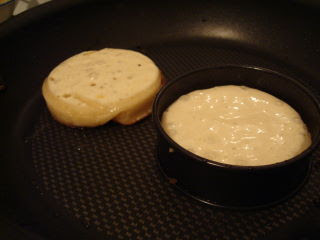 After a couple of practice crumpets got slightly overdone (but still eaten, obviously), the perfect pan temperature was found and the results were one of those simple pleasures that: a) had me giggling as butter dripped down my front; and b) didn't make it out of the kitchen before being consumed. The pattern was basically cook, butter, scoff, repeat. It was, frankly, a bloody good day.

Greedy Diva said…
Inspirational - nothing better than a good bit of crumpet on a cold day! Although, my boyfriend thinks I'm disgusting as I like them with Vegemite.
11 January 2010 at 08:38

Jennifer said…
I nearly made them on the weekend too but as it was just me decided not to. You have shown me the error in that decision making - they look delicious!
11 January 2010 at 10:32

Unknown said…
I'd never considered making a crumpet before. It was just one of those things I assumed you needed a special hole-making machine for (I know, not my brightest moment) but now I think I'll attempt it
13 January 2010 at 05:35

Luiz Hara said…
Hi Neil - did you manage to get those littles holes going through them, I mean that kind of texture? They look really good. I tried a recipe where you dip the crumpets in beaten egg and grated cheese and fry them on frying pan. It was a very delicious breakfast.
15 January 2010 at 10:27

I've decided to make them again this weekend after discovering the problem FINALLY which was simply that my bicarb was too old! What an idiot.
15 January 2010 at 12:18

katkat'skitchen said…
Once you have tasted a home made crumpet andexperincned the light melt in the mouth sensations
you can never go back to the rubbery hard tasteless confection thast passes for shop bought crumpets.

A beautiful recipe thanks so much for sharing, I ate them heated on a bonfire with friends because a crumpet is rather more than a taste it is an experience with friends.
22 January 2010 at 08:49