It recently came to my attention that a "friend" of mine - and someone I'd known for a decade or more - decided to unfollow me on Twitter because I was "smug". If they're reading this, they may wish to look away now because, frankly, it's not going to get any better.
As some readers are aware, I started life as a private banker before somehow stumbling into the world of journalism. I often jest that the difference between my current job and the old job is that I tried work and didn't like it and this is much better. And it is. Without a doubt. Whatever the problems, the cashflow issues, the occasional frustrations, it's easily forgotten when, for example, I'm writing this in a hotel room in New York where I've been sent to do a feature about food and get to travel with two of my favourite people, foodie or otherwise: Iqbal Wahhab of Roast and William Leigh of, well, anyone who'll have him. The tart.
I'm not going to do the usual thing of extolling New York as the greatest food city in the world. It is, of course, excellent but, frankly, just as capable of delivering up something rubbish as any other city. The thing is, of course, that once you decide to travel the thousands of miles to get here, you're rather likely to have done a little preplanning in terms of where you're going. That, inevitably, goes double if you have a moderate claim to put "food journalist" down as your job description.
As many have noticed, it's been one of those funny spells where EVERYONE appears to be going to New York, or has just returned. That meant a large number of recommendations on where to eat and, inevitably, too few days to do them all. Unless, that is, you split dishes with a colleague or two and do as much as you can in the time available. And that's how dinner at Blue Smoke on Saturday night became my tenth food stop in 24 hours.
Friday Night 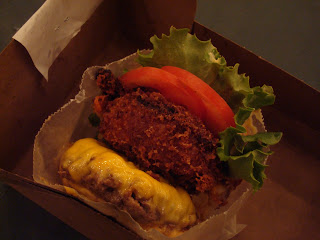 With Iqbal otherwise detained (as I would have been if a beautiful TV presenter wanted to have dinner with me), Will and I were on a mission to graze New York's finest handheld snacks. We had a hell of a list but, with a map, our walking shoes on and a couple of beers inside us (and thank you, international mega-corporation for the regular McWees), we headed from Midtown to the low numbers for several highly recommended things to eat. 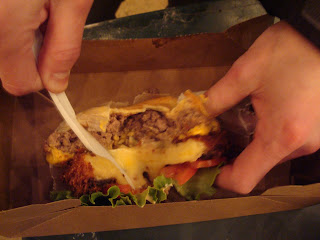 First up, Shake Shack, one of New York's recent sudden successes. Fries were shunned and the milkshakes / frozen custard concoctions left for another day (hopefully Thursday...). There was just one thing on our minds. A burger, namely the signature Shack Stack: the standard burger, cheese, all the usual stuff, topped with a cheese stuffed, breadcrumbed mushroom. It was torn in half, photographed to within an inch of its life and consumed with gusto. Damned good. 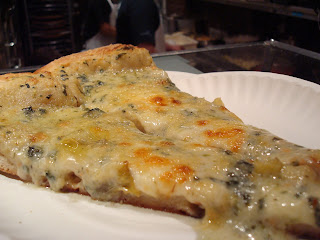 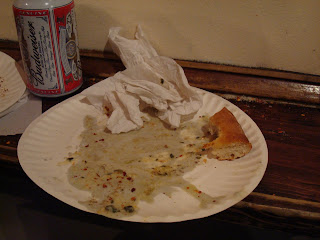 Over an earlier glass of wine, an associate and the waiter agreed that the best pizza to be found in New York was at Artichoke, a little hole-in-the-wall place on 14th Street, between 2nd and 3rd. I've not got much else to compare it to as far as NYC goes but Jesus, this was great pizza. At the suggestion of the actress in the queue ahead of us and the very nice girl who sold the beers, we opted for a slice of signature / titular artichoke pizza. Cheese, oil and bits of dried chilli smeared our faces as we crunched our ways through the carefully dissected slice, whimpering at the quality of the dough, the differing textures, the blend of flavours... 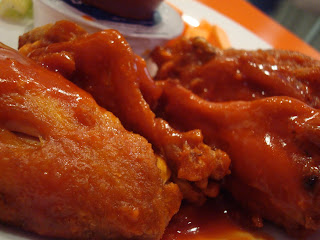 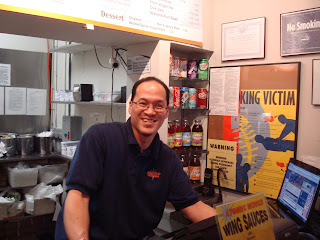 According to our careful planning, Luke's Lobster was just a few blocks away and, at various people's behest, we headed to E 7th for the signature lobster roll. This being New York, however, and us being us, there was a distraction en route in the form of New York stalwart Atomic Wings. What is it about the wing that's so damn appealing? These would turn out not to be the best example New York has to offer but pretty bloody good nonetheless. We wanted heat but not, as Will described it, "anything nuclear." That was, inevitably, the point we discovered one of their heatlevels was actually called "nuclear". The very nice chap behind the till allowed us to bend the rules and share five wings rather than the normal ten, with a "medium" heat setting, but also threw in a little tub of their "suicidal" sauce... which turned out to be anything but. Never mind, they were hot, crispy, left the lips with a decent tingle and fuelled the short walk to Luke's where the (yet more) charming staff threw us a load more dining suggestions, posed for a pic and served up some very well cooked lobster in a lightly toasted milk roll. It's not going to jangle all the tastebuds in the way a spicy wing does, of course, but this was a very good sandwich indeed. 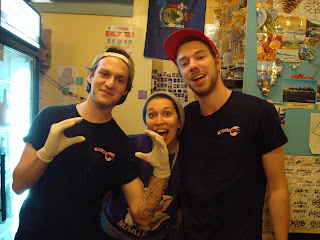 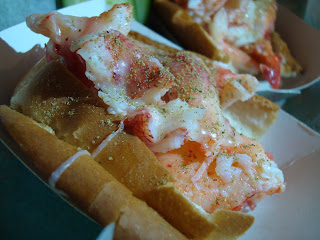 The next scheduled stop was Banh Mi Zon but, due to lack of planning (and, probably, that unscheduled wing detour) we missed closing time by a few minutes. Never mind: just around the corner we'd stumbled across another that had been on our original list which we hadn't factored in for this snack trek across the low numbers, the highly recommended Porchetta. It wasn't as good as people had said. It was considerably better, prompting a relatively sober tweet from me involving the words "holy" "piggy" and "fuck". The roll had been finished with a little cornmeal dusting to give it an excellent crunch when toasted. The meat was rich, succulent and suggested a pig that had enjoyed a short but gratifying life. The whole thing - particularly with a smear of their home made sriracha - was probably the best thing of that evening. Lovely staff too and the piggy tip "jar" was the sort of item that brought out my latent kleptomania 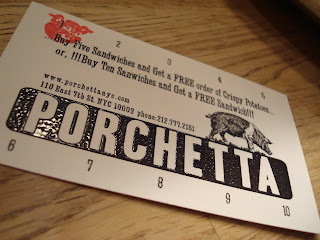 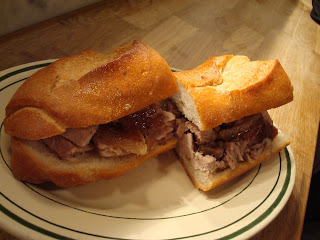 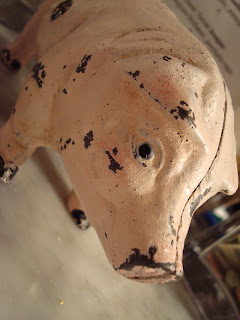 There's a lot more to be written up from this trip - the tasting menu from Le Bernardin, the delights of Locanda Verde, the brilliance of Kyochon's wings and the messy delights of the to name but a few - but Snack Night takes some beating. If that makes me smug, then stuff it, smug I'll be...

William Leigh said…
i hate that you're still there.

Kavey said…
Celebrating and sharing some of the good kharma is not smug it's just being joyous.

Anonymous said…
The concept of sharing everything and being on a continuous food tour is so enticing. Now I just need to go to NYC with 14 of my closest friends to have a chance to cross everything off the foodie list.
4 March 2011 at 04:20

meemalee said…
When I finally make it to New York, I'm gonna print this out and take it with me.

Helena Lee said…
Agree with you on Porchetta. I tried them at Brooklyn flea and though the flavouring was lovely - I thought it was really dry.

Have you tried 5 guys burgers on Bleecker? I thought that was great value, and pretty damn tasty burgers.
8 March 2011 at 01:07

Deena Kakaya said…
Few people are brave enough to follow the heart-good on you!