As mentioned a while back, I've got a few "duty bound" posts to catch up on as well as a few foreign adventures. Seeing how something from the former is assisting me with the latter, that seemed like a good place to start. Also, given that it's gadget based, it's not such a departure from Japan stuff: I mean, I'd tell you about the happy minutes spent playing with the various automated toilets but hey, this is a PG-rated blog...


A couple of weeks ago, I received an e mail asking if I'd like to have a play with one of Lavazza's new coffee machines. Let's break that one down to the basics. I'm a freelance journalist. I work from home. Coffee is therefore about 70% of my genetic make-up.

My "instrument" of choice is my faithful old Bialetti and there's something calming (and pleasingly ironic) about the ritual of making a stove-top espresso. While the resulting coffee helps kickstart the morning,  that 15 minutes away from the desk, from the grinding of the beans to the first satisfying , bubbling hiss as the coffee starts to dribble through, is also a chance to take a few steps back on the day, collect thoughts and regain some focus.

As such, Lavazza had their work cut out. I love my Bialetti, I love my routine, I love (and need) my caffeine fix.  But, you know, I'm a bloke and therefore a love of gadgets comes fitted as standard and, while the Lavazza A Modo Mio doesn't come with a bidet function, a heated seat or a deodoriser - let's be honest, it would be pretty offputting if it did - it does have a steam nozzle so you can make frothy drinks.  And this makes me very happy. 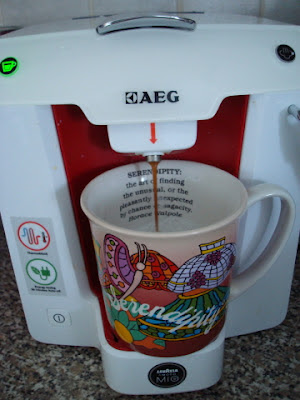 Is it better than the Bialetti? Actually, it's pretty close, although my critical faculties pre-coffee are certainly questionable. The colour-coded pods range greatly in flavour but the red one ("dark, velvety and full-bodied") is very decent and one of the two stocked in our local Waitrose. The pod system is also, obviously, cleaner than the Bialetti: while the allotment benefits greatly from the coffee grounds, the sink, work surfaces and floor don't which is a problem if you're a clumsy bugger. And I am a clumsy bugger.


The purist / snobby side of me will always stand up for the Bialetti but, actually, the convenience of the Lavazza machine is surprisingly easy to like and the frothing of the milk is a highly enjoyable new morning ritual. Ironically, it's probably also helping me reduce my caffeine intake a little: the Bialetti is brilliant but it does, basically, make six espressos at a time and, let's face it, moderation in consumption really isn't my thing. While it might appear I've sold my soul for a compact coffee machine (I haven't, I sold it long ago for a lot less than that), it's caffeine, more sleep and something new to play with. That's got to be a thumbs up, right?

Kavey said…
Sounds like a good one for someone who makes coffee at home a lot...

Neil Davey said…
True, but it also takes up relatively little counter space which is a big plus.
11 February 2012 at 05:36

John said…
I had one of the nespresso machines with the pods - it was very good for a quick "proper" coffee, but I found the refills to be very expensive. Also, I prefer to have coffee without additives, the pods had quite a lot of sugar etc.

Do you know what these ones are like with regards ingredients?

beachhutcook said…
I often wonder how come I can make a decent cup of coffee by pressing a few buttons on my machine at home and stuff in certain coffee shops taste like hot water? Maybe Ive cranked mine up to toxic level?
14 February 2012 at 04:46

Restless Native said…
I used to roast coffee for a living. I know little about these new fangled machines though.
I miss the barrels of Blue Mountain; I never got to roast any Hawaiian Kona.
14 February 2012 at 05:38

Anonymous said…
tis an ugly thing I'm sorry to say....AEG didn't they sponsor Man U...whats a hand shake
agree with Kavey ...and I'm not sure about a mug saying serendipity....too many american nisations going on...simple white cup with an espresso in it innit ..but then we can all be stars for bucks lol
still lovely post sir
15 February 2012 at 07:42

youngandfoodish said…
That froth is indeed frothy - big bubbles rather than invisibly tiny ones forming a silky textured microfoam.
17 February 2012 at 06:34

Neil Davey said…
I can only stress that the quality of the foam and size of the bubble is a lot more to do with the operator than the abilities of the machine...
18 February 2012 at 05:46

yerba mate side effects said…
I like how you compliment the Bailetti, it's really a good one. While I love my coffee black and please no sugar in the mornings, I couldn't resist a mug of frappe or cappuccino in the middle of the day or as my nightcap. The LavAzza coffee has been a tradition in European homes for over 100 years,so no question on what it tastes like. :)
1 May 2012 at 23:37