As is clear from this blog, my public profile and, let's be honest, my physical profile, I love food. Food is a never ending journey of discovery (and a source of endless bleeding cliches). Food inspires, be it recipes, combinations or conversation. Food brings people together. Food just rocks generally.


As a result, there are questions I get asked a lot. "What's your favourite restaurant?" is a regular (and maybe I should do a post on that sometime soon). "What would be your last meal?" is up there too. In at least equal first place though is "what's your favourite type of food?". My answer has long been Mexican.


To be honest, it wasn't based on much accuracy or experience, just my own half-arsed attempts at Mexican classics using Old El Paso beans, a love of chiles and a sense from what I read that, yes, it's going to tick all my boxes. Over the years, I've experienced some fantastic Mexican and Mexican-influenced meals, from New York stalwart Rosa Mexicano to The Cactus, the much missed buffet restaurant on Haverstock Hill.

Ah, the Cactus... I celebrated my 30th there, having had to convince a number of friends that, yes, I know "All You Can Eat for £4.88" doesn't suggest it's going to be much cop but give it a go. I then spent the rest of the evening nodding when everyone of them walked past with their second, third or fourth plates of food telling me "this is really good!" Er, yeah, I know...

Over the last few years, Mexican food has improved tremendously in London. It's no longer just the Chiquito's gloop in a tortilla ("it's all basically the same, just folded differently" as Billy Connolly once described it), we've got fine places like Taqueria (and the excellent people behind it from Cool Chile Co which, had I spent money on shares instead of their products at Borough and Taqueria, I'd now own). There's Wahaca, of course, with the fabulous Tommi Miers and team demonstrating the range and vibrancy of Mexican street food. There are countless burrito places (and I'll get on to them in a separate post soon - because I promised - and just send you to Rosie's excellent research in the meantime). Some will no doubt debate the whole Tex Mex / Cali Mex thing and bitch about the "authenticity" - because people always bitch about authenticity - but, you know, the Mexican chefs I've meet over the years happily admit that their cooking style was always a collection of regional ideas and that they've now borrowed US influences themselves, so what does it matter? I have a battle cry in such circumstances. Say it with me now people: "fuck authenticity, does it taste good?"

Er. I digress. I'll get back to the authenticity rant another time but, for now, it's back to the Mexican food I loves, even without trying it at source. But now I have. And it's still love. Even more so. 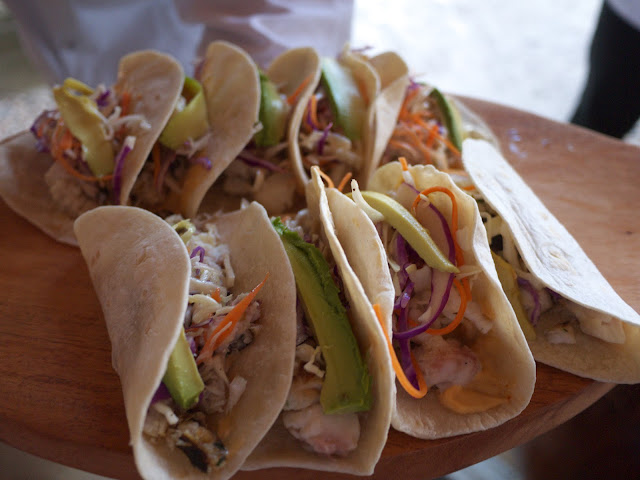 I've been getting closer to Mexico for a couple of years now, with press trips to Texas, Arizona and then California. Then, in February, the chance came to visit the Riviera Maya and indulge. Once again, I'm not going to claim it was a thorough study of the cuisine based, as it was, on a very small part of the country. Nor did it involve lots of little taquerias or hole-in-the-wall places as, when the opportunity could have presented itself - the long road up to Coba - and I could have asked the minibus to stop, the number of dogs running in and out of kitchens was a little offputting. Call me old fashioned but I like my tacos without hairs. However, thanks to the lovely Jetzabel (every bit as brilliant as her name) head chef at the Viceroy, Team Mexico got a great variety of everything from virtually-still-breathing ceviche to an incredible creative modern Mexican dinner, via quite brilliant, habanero-spiced breakfasts to fish tacos. Much has been written elsewhere about the textural joys and all round deliciousness of the fish taco so I'll just add my two penn'orth here: they're right. Jetzabel kindly allowed me to spend a couple of hours in the kitchen as part of a forthcoming challenge which I'll fill you in on in due course...

I could rattle on about dish after dish but I've probably waffled enough. Time to let the new camera / pictures do the talking.

Joseph Lewis said…
Awesome photos Neil. Like you before your trip, the closest I have ventured is also California. I would love to experience the flavours first hand and this post inspires me to take one step closer.
2 June 2012 at 05:36

London Corporate Cooking said…
I love Mexican food too. And I have to say I am chuffed to bits at the photos. I am feeling peckish just by looking at them. I hope to visit Mexico someday.
15 June 2012 at 07:42