A pattern often emerges when I'm following a recipe. Somehow, despite kitchen cupboards heaving with random things, a spice collection that's extended across one and half shelves AND an entire draw and an allotment that's producing all sorts of lovely veg, whenever I come to a specific recipe, I'm always missing a key ingredient.

As mentioned several times already, I've gone willingly to the dark side of - clutch on to your integrity dear innocents! - sponsored blog posts. The price? San Daniele Prosciutto and Grana Padano Cheese. The moral dilemma (ahem) was debated and dismissed here. It's not like I'm endorsing something I don't like and don't buy on a regular basis. If you ever see me celebrating Marmite or Iceland Prawn Rings, then you have my permission to shun me but until that point... besides, it's not like I haven't gone on about cheese and ham here before. The blog - like me, probably - is about 80% cheese and ham. 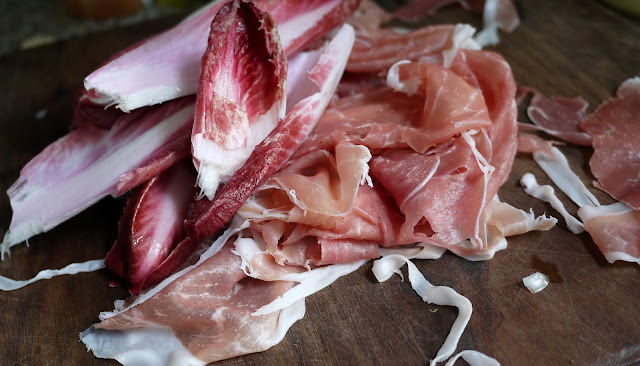 The next recipe I'd agreed to test was Risotto al Radicchio con prosciutto di San Daniele e formaggio Grana Padano, and no, I won't insult you with a translation. It's another recipe from Giancarlo Caldesi and the ingredients are pretty straightforward (serves six):

Can you guess what I was missing? Nothing major, just, er, the rice. As a lover of risotto, there are very few days of the year when the cupboard doesn't contain at least one packet of carnaroli or arborio. This though was one of them. I could have nipped out to a local supermarket and we have an excellent little Italian deli pretty much over the road (next door to Majestic Wine - seriously, could we be more North London?) but as I may have mentioned before, we're on a bit of a mission. When I say our cupboards are full of randomness, I mean they're full of randomness and, for the next few weeks, we've made a vow to stop buying new stuff and have a clear out of cupboards and freezer. We're allowing ourselves to buy the basics - bread, when we don't make it, milk, fruit - but, where possible, it's time to empty the shelves of the assorted dried noodles, oddball pastas and things I've been sent or have purchased on a whim. I reckon we've got about six weeks of reasonable dining there... and then a fortnight of utter weirdness.

So, no carnaroli wasn't a big problem as I did have a packet of Sharpham Park's excellent spelt which makes an excellent, slightly nutty alternative and behaves pretty much the same way in the pan.

As with the previous recipe, this starts by frying the Prosciutto di San Daniele in sunflower oil until it's crispy. If you can resist the smell - you have no idea - you leave this to drain on kitchen paper, while you prepare the main event. 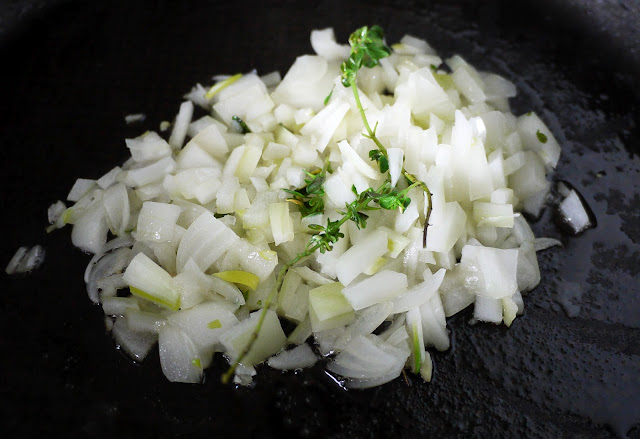 In a large pan, melt the b utter and oil together, and fry the onion until soft, with the thyme. Add the radicchio and Prosciutto di San Daniele - the recipe calls for cubed but I used the usual thin slices torn into strips - and fry together for a few minutes. Remove the time, and add the rice / spelt, stirring it into the onion and radicchio and then, a couple of minutes later, adding the wine. Stir for around three minutes, then start adding the stock, stirring over a medium heat, adding more stock when you can see the bottom of the pan. But you probably knew that.

The next bit is pretty much up to you. After 20 minutes or so, taste the risotto / spelt-er-otto, and check the texture. If it's how you like it, stop adding stock and remove from the heat. If you prefer something a little soupier, add more stock, keep going: your pan, your rules. Season to taste, stir in the cheese and butter, then serve drizzled with balsamic. And, frankly, more Grana Padano: it's not a salad, is it? 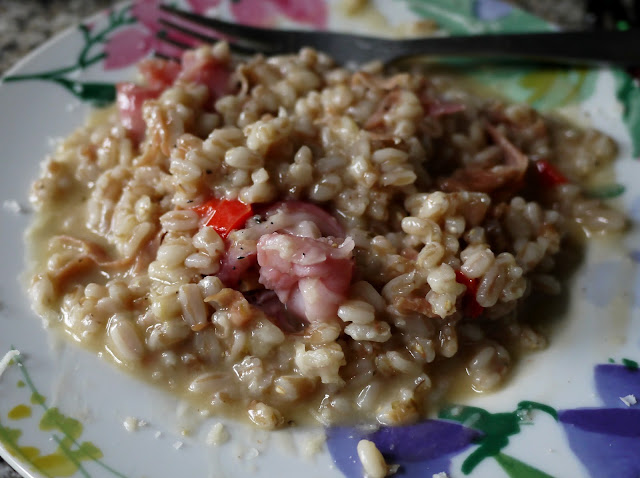 The result? Seriously comforting bowls of loveliness. When making it again, I might keep some of the Prosciutto di San Daniele back and add it at the end, to keep more of that crispiness, and will perhaps try endive instead of the radicchio as I felt that flavour got a little lost. Hell, I might even buy some carnaroli...

Marmaduke Scarlet said…
I have acquired some of the same spelt and was wondering what to do with it. Problem solved - perfect comfort food!
9 October 2012 at 03:00