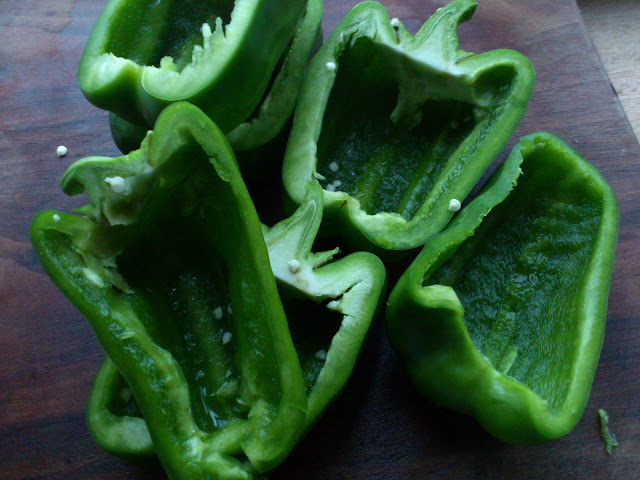 There is nothing like planning. And this was nothing like well yeah you get the point. The final bit of recipe "testing" for San Daniele Prosciutto and Grana Padano Cheese (and - sob - the end of the stock of both I had in the fridge) is yet another Giancarlo Caldesi special. And once again, those best laid plans of mice, men and mine gang aft agley although agley is when you usually earn your chops in the kitchen and when you discover cunning alternatives. And hey, recipes are just guidelines, right? They're not set in stone...

This particular recipe is for Foglie di verza ripiene con prosciutto di San Daniele e formaggio Grana Padano. Or, put another way, braised savoy cabbage leaves stuffed with exactly what you'd expect them to be stuffed with in this instance. We haven't grown Savoys this year so, in  a burst of organisation, I bought one specifically for this recipe... and promptly forgot about for three or four days. When I came to make this, the cabbage was a little whiffy and going brown in places that cabbages shouldn't go brown. After swearing to myself - and at myself for abject idiocy - I decided to make the stuffing anyway, refrigerate it and then I'd get a cabbage the following day and we'd be back on track.

During that next 24 hours, I spotted a small flaw in this particular bit of recipe exploration. Well, not the recipe per se, more the fact that, actually, thinking about it, I'm not exactly the world's biggest Savoy cabbage fan. While I'm sure it's delicious - I don't think I've ever followed a Caldesi recipe without at least very decent results - I wouldn't be the best judge. That's why, with a bowlful of great stuffing chilling down, I needed to find another suitable vessel. In the spirit of domestic clearance - and following a highly and surprisingly successful crop from the allotment -  I went with another vegetable: the green pepper.

Er, yeah, I know. Not exactly a close relative of the Savoy cabbage or, indeed, any of the brassicas as a whole. But: a) we had lots of them; b) they're not exactly unknown in the realms of Italian cooking; and c) they taste a whole lot better than Savoy cabbage. While green peppers can often have a slight bitterness, the homegrown ones have been deliciously sweet. They're also quite sturdy vessels when it comes to stuffing.

Bring a large pan of salted water to the boil.  Cut the base off the cabbage and carefully separate the leaves discarding the first three tough dark green ones.  Drop in around ten leaves and boil for around five minutes until softened in the middle part of the stem.  Remove the leaves with tongs and put into iced water to stop the cooking.  This will help to keep the bright green colour too.  After a couple of minutes remove from the water and lay to drip-dry onto a tea towel. 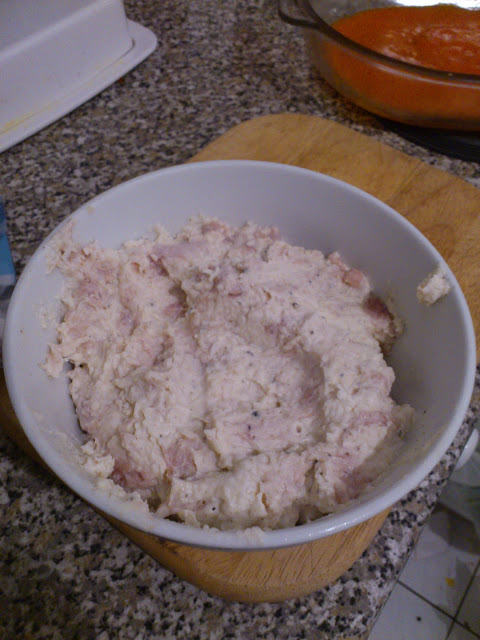 Preheat the oven to . Meanwhile mix the Prosciutto di San Daniele and other ingredients together for the stuffing. Cut a triangle out of the bottom of each cabbage leaf and make little slits with a sharp knife along the thickest part of the backbone of each leaf.  Put a tablespoonful of stuffing in each leaf and start by folding in the outside leaves in and then fold over the stem end.  Roll up with the thinnest part of the top of the leaf on the outside.  If any leaves break, double wrap them using another leaf.  Continue until the stuffing is used up. Or simply hollow out some green peppers and stuff those. Ahem. 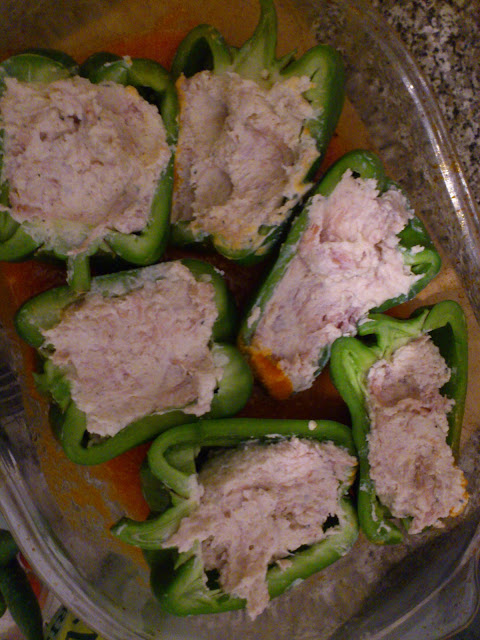 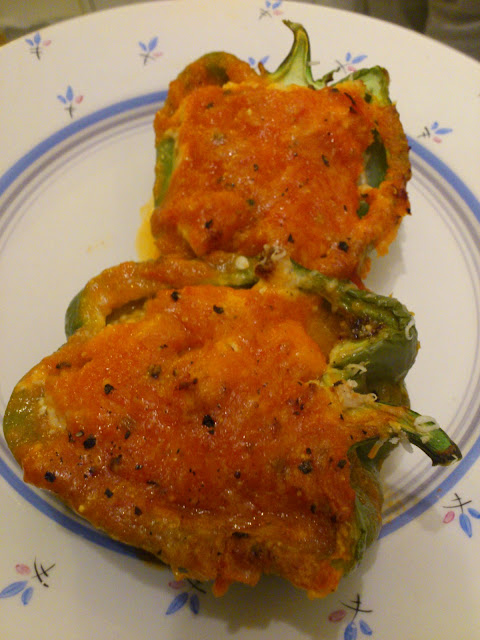 For the tomato sauce
4 tablespoons of extra-virgin olive oil
1 large onion, finely chopped
2 garlic cloves, peeled and lightly crushed
Salt and freshly ground black pepper
800g (two standard tins) tinned tomatoes - or lots of fresh tomatoes which is what we had to hand... 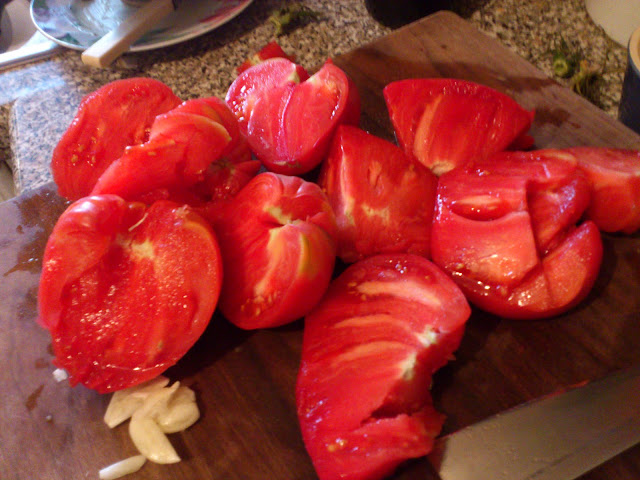 Soften the onion and garlic with a generous pinch of salt and a good twist of black pepper in the oil in a large saucepan over a medium heat for around ten minutes. Add the tomatoes and wash the cans out with 100ml of water. Add this to the pan.  Simmer the tomatoes for around 20 minutes, mashing them with a potato masher (I went with a stick blender) to break them up. Adjust the seasoning as necessary and remove from the heat.

I have to say this was probably the best recipe of the lot and certainly the most flexible. Giancarlo himself suggests using up other leftovers in the stuffing - the risotto would work brilliantly as it happens. By the time the ricotta and Grana Padano melt into the tomato sauce, you're going to want to have some good crusty moppy-up bread to hand. Actually, this would work pretty well as a soup: that sauce, thickened with ricotta, Grana Padano cheese with little bits of San Daniele? Er, would you excuse me for a second? I have to go find a saucepan...

I just would like to give a huge thumbs up for the great info you have here on this post. I will be coming back to your blog for more soon.

Unknown said…
I am very thankful to you for outstanding post. Perfectly composed information really experienced knowledge. I really enjoying and I’m going to bookmark so i can read new articles you post in future.