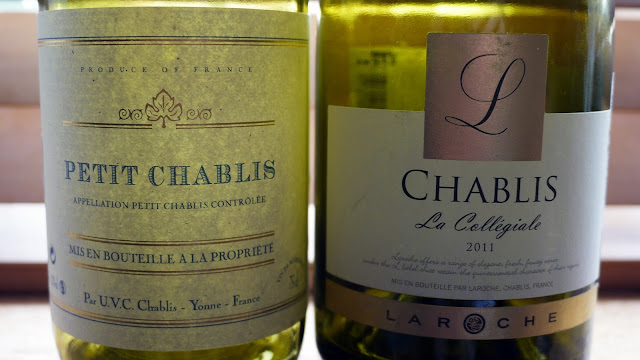 Last year, as you may recall - relax, I'm not expecting you to, I'm constantly amazed that anyone reads my random calorie-fuelled musings - I was approached with a Chablis-based challenge. Well, I'm pleased to say that the grape-based gauntlet has been thrown down once again. Last year, the subject was "find something interesting to pair with Chablis" and I took it as en excuse to ramble on about my long-held opinion that white wine - particularly something crisp and clean and "minerally" like a Chablis - is frequently better with cheese than the oft-quoted red.

This year, the challenge was a little more specific: throw the Chablis up against the takeaway dish of your choice. Or, in the name of thorough research (or "greed" as it's generally known), takeaway dishes.

While Finchley isn't going to challenge Soho anytime soon for its selection of restaurants, we do have some great places, and a good range of nationalities and cuisines. Having perhaps not given Chablis the thorough work out it probably deserves last year, this year we went for it. And the results were... well, if not surprising, knowing how versatile this wine can be, certainly impressive.

The wines in question - both available from Majestic - were a Petit Chablis (2011 Union des Viticulteurs de Chablis, £9.99) and the Laroche 2011 Chablis La Collegiale, £13.99). For those unfamiliar with such things - or whom, like me, have brains that remember grapes not geography - these are Burgundy wines and 100% Chardonnay.

The former, according to Majestic's own notes, is "bright and approachable with an absence of oak allowing the generous ripe apple and citrus fruit to shine through" that's "best enjoyed with fresh white fish or seafood".

The latter, again according to Majestic's own notes, is "pale golden" with "a youthful citrus nose with spring blossom nuances." Which suggests Majestic have been exposed to a completely different type of youth than I typically experience on the Northern Line. "The palate is fresh and harmonious with nicely focused fruit character and a lingering stony texture on the finish." As for tasting suggestions, "freshly prepared sushi, or a salad of prawns and watercress."

And, boringly, we'd have to agree. The Petit Chablis was, as the name suggests, more compact in terms of nose and appearance - it's a very pale straw colour, with a gentle hint of fruit on the nose - a little "thinner". Not in a bad way, by any means, it just lacked the buttery mouth feel of the Laroche which, to our palates, was closer to the feel of all those Aussie Chardonnays we drank in the 90s, with a honey like hue and a much riper nose, although considerably subtler in terms of oak than its Antipodean rivals.

The Petit Chablis was particularly crisp, which is a very hard thing to get across unless you've experienced it. It's not a dryness thing, it's more the brightness of the flavours - and yes, citrus fruits and apple were to the fore. If it's not too pretentious to say, the flavours just kind of present themselves, in a very pleasant manner, before evolving into that stony, fresh mouthfeel with, to my mind at least, a lingering hint of pear drops. Now there's a way to show your age...

While the Laroche finished in similar style - I know stony and mineral don't sound appealing but man, it's delicious and refreshing - it's a very different, altogether more rounded wine. "Harmonious" is actually a good word (nice one Majestic, you've got a future in this business) as the fruit and that mineral crispness sort of evolve together before fading into a lovely melon-y hit.

Right then. That's enough wine talk - if you'll excuse my amateurish attempts at going the full Goolden - onto how it matches up with food. Given that our local takeaways are noticeably light on "fresh white fish and seafood" - outside of batter, anyway - and "freshly prepared sushi" we were winging it all the way. Also, our local branch of Prawns And Watercress Salad Hut is currently closed for refurbishment...

Finchley, like many bits of North London, scores very highly though in terms of Turkish takeaways including our all too regular haunt Durum Ocakbasi. We've also got pretty decent pizza and mainstream Italian from Da Lillo and the excellent Meera's which I've previously written about here. We've also got a superb Vietnamese called Vy Nam Cafe, however we've found the takeaways aren't quite as good as eating in, so ruled that one out. So how to choose between the other three? Er, we didn't. 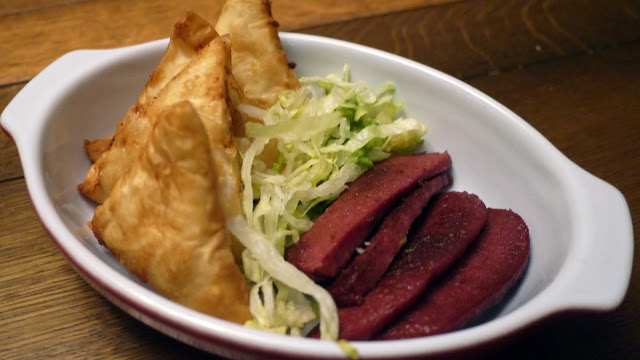 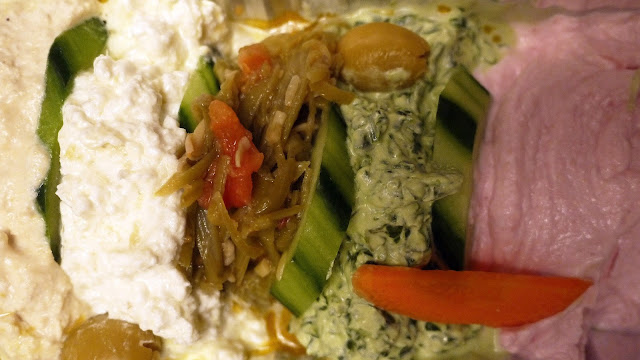 Hence from Durum we had the mixed cold mezze - dollops of humus, tarama, cacik (yoghurt with cucumber and garlic), califasulye (green beans in olive oil) and ispanak tarator (spinach, yoghurt and garlic) - plus a portion of sucuk (that addictive and spicy chargrilled beef sausage) and some muska boregi (feta-and-parsley-stuffed pastries). The Laroche was a good match and very drinkable but the lightness and freshness of the Petit Chablis really sang against the garlic and spice and, best of all, the boregi, where it cut through the richness of the feta and the crispy, fatty pastry without overpowering the flavours, and also gave the parsley its place in the spotlight. All told that was probably the best pairing of the night. 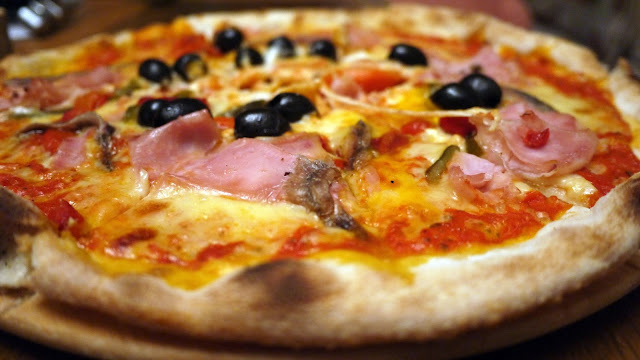 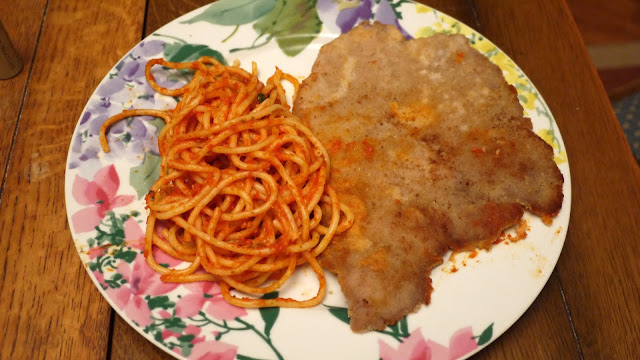 From Da Lillo, we thought we'd challenge the bottles with a Capricciosa pizza - mozzarella, tomati, ham, peppers, anchovies, egg and olives to stop you having to Google it. We also ordered Milanese con Spaghetti because: a) it's delicious; b) it reminds Mrs L of Italian meals of her youth; c) we're pigs; d) we like cold escalope sandwiches if we don't finish it; and e) we had to get the order over £12 to get free delivery). This time, both wines got a chance to shine, with the Petit Chablis pairing well with the Milanese (although I might argue the Laroche worked slightly better with the spaghetti part of the meal) but the standout was the Laroche with the Capricciosa. I'm not always a great lover of the anchovy although exposure to the work of the great Jose Pizarro has helped change my mind. Here that deep underlying salt hit and the in-your-face fishiness found a damn fine partner in the Chablis, which also linked well with the richness of the egg. A very close second to the Petit Chablis and boregi pairing. 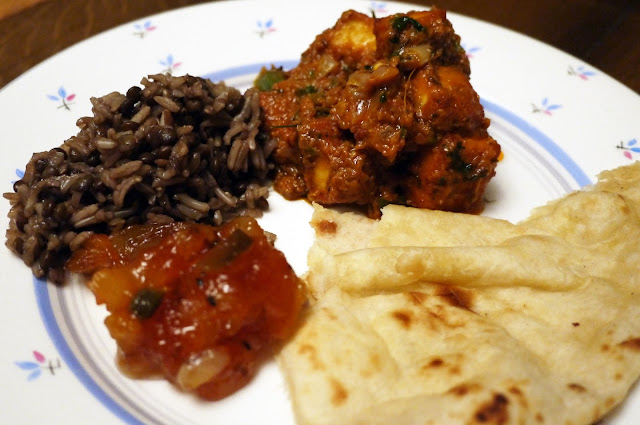 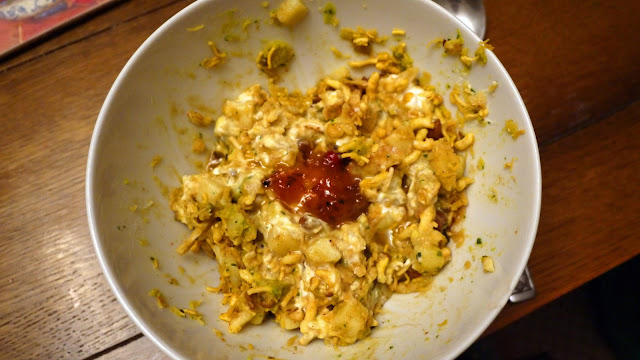 The wines went back in the fridge for an hour or so while we had a pause (read "nap") before giving it the possibly greater challenge of bhel puri (which tasted much better than it looks) and an even-by-my-standards hot and fantastically rich paneer masala, plus a naan and some home made lentils and rice. This may have been a couple of dishes too far for us, but the Chablis, the versatile little sausage that it is, coped reasonably well. The Petit Chablis fared better against the paneer while the Laroche fared better against the bhel puri - well, until the addition of a little yoghurt, which probably gave the Petit Chablis the edge, although neither pairing was quite as good as the earlier session's matches.

After that - and, yes, alright, after another impromptu nap - the wines were finished on their own.Both are very good "drinkers" in their own right. If I had to pick, I'd probably go for the Laroche but then I'm a sucker for that big buttery mouthfeel while the oak-loathing, too-many-bad-Aussie-Chardonnay-experiences-in-the-90s Mrs L would go for the lighter refreshing nature of the Petit Chablis. After a fine (and pleasantly squiffy) experiment though, I think we can call it a draw.

The Petit Chablis was interesting - definitely the less complex of my two wines as well, but shone more with the food. The whole experience did remind me that I should be drinking more Chablis. It's for the best.
18 March 2013 at 03:44

Anonymous said…
both excellent quaffable wines...seemed to hit the mark...got slightly quiffy and forgot to rate it with the food.. better give it another go
lovely witty prose sir cheers
seems I too had a very different youth to one of the wines.. where do they find these little bits of wisdom... now that gilly is working on best chef or something or other.. can you smell the blackberries and horse saddle leather... no I cant but as Milligan said
good god I'm pissed
20 March 2013 at 22:40

Wedding outfits for men said…
that a lot of these guys were involved with social clubs in Manhattan and wanted to have one out here.
22 March 2013 at 23:30

Elizabeth J. Neal said…
This year, the challenge was a little more specific: throw the Chablis up against the takeaway dish of your choice. Or, in the name of thorough research (or "greed" as it's generally known), takeaway dishes. www.takeaway4less.co.uk